You are here: Home/Write-up/THE CONTACT RESISTANCE OF THE ELECTROMECHANICAL RELAY

However, the contact resistance is the sum of multiple resistance values, each influenced by several very different physical variables.

By breaking down a hypothetical contact resistance of an electromechanical relay we can identify:

• the resistance of constriction

• the resistance due to pollution or contamination.

Propagation resistance is that part of the contact resistance mainly influenced by:

• the type of material used for the construction of the contact itself, or the intrinsic resistivity of this material

• the geometric characteristics of the global contact, i.e. the characteristics of the path that the current will have to face to go through the entire contact, not just the terminal part. The main parameters to be evaluated are the shape and section of both the contact blades and the end part, also known as the pad. The longer the path and the smaller the section, the more the propagation resistance increases.

The constriction resistance is that part of the contact resistance influenced by other constructional characteristics of the electromechanical relay, such as:

• The contact surface, meaning the surface part of the contact pads through which the current can actually flow.

• The pressure with which the contact pads are "forced" or pressed against each other. 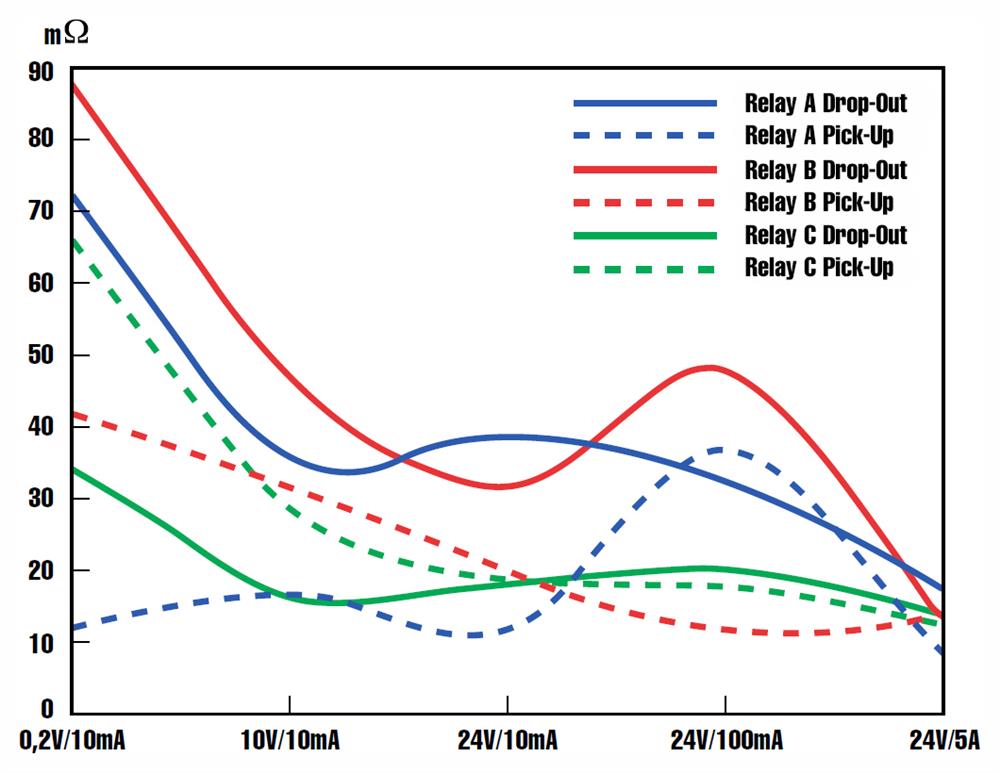 Resistance trend vs. voltage and current on the contact

In determining the constriction resistance, the contact pressure is the predominant component. For this reason, during the construction phases of the electromechanical relay, more specifically during the calibration phases, great attention is paid to regulating the force with which one contact presses on the other. This force is also referred to as the coupling force. 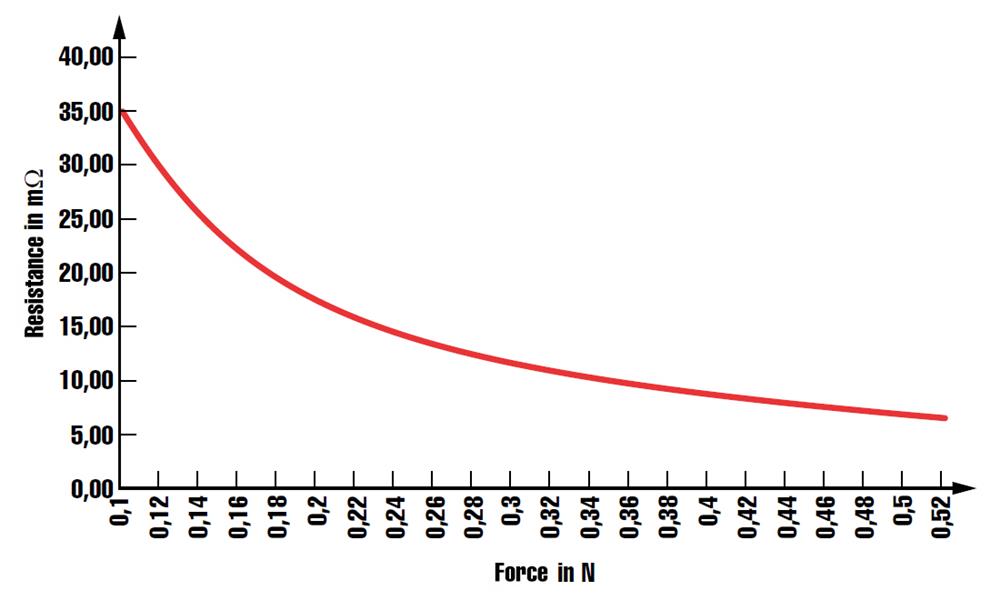 Finally, the resistance from pollution or contamination is that resistance due to the progressive degradation of the materials that make-up the relay itself.

• The so-called “degassing” phenomenon is observed in particular on plastic components, i.e. a continuous process of elimination of gases and plastic micro particles that can gradually deposit on the relay contacts, affecting the contact resistance.

• Together with this, during relay switching, also the contact pads can sublimate, especially in the case of heavy loads switching, deforming the surface available for the passage of current. This phenomenon, in extreme cases, can create real cusps and craters that significantly affect the contact resistance.

• Lastly, as regards non-hermetic relays, a significant amount of pollution is caused by the environment outside the relay. Especially in critical environmental conditions, it is possible that the relays are directly exposed to dust that can enter into the relay cap, especially during its heating and cooling, depositing itself on the contacts.

To reduce the increase in contact resistance due to pollution, during the relay design phases, great attention is paid to obtaining self-cleaning contacts. Self-cleaning contacts are so called because during switching the contact pads not only touch and press against each other, but also perform a sliding motion which helps to keep the contact surface clean and efficient where current flows.

We can therefore state that the contact resistance is a resistance value characterized by a strong dynamism and subject to significant changes during the life of the relay.

Furthermore, in case of non-use of the relay, for example after long periods of storage, the contact resistance may increase due to a normal and slight oxidation of the same or to polluting deposits.

In the case of loads characterized by high current and voltage, the contact resistance plays a more marginal role while it becomes objectively more relevant in the presence of very weak loads, which in extreme cases require, as the most suitable measure, to go for gold plated contacts or other surface treatments able to drastically decrease the contact resistance.

To determine if a relay is suitable for the task we would like to assign to it, we must pay particular attention to the material of the contacts and the relative finishings. The relay manufacturer will be able to propose the best option according to the type of load that the relay contact will have to manage.

In case of low currents switching, the gold plating treatment of the contacts must be considered.

The gold plating of the contacts is a surface treatment, widely used to drastically reduce the contact resistance and avoid oxidation of the contact surface over time, while maintaining the ability to conduct low currents almost unchanged.

A traditional contact made with silver-copper alloy is able to switch even a few mA when it’s new. Over time and in the presence of severe environmental conditions (sudden changes in temperature, high humidity) the appearance of oxidation will worsen its performance and the contact will no longer be able to conduct the few mA that it could guarantee when new. Indicatively, a copper-silver alloy contact can reliably conduct a current of about 20-30mA, while the use of a gold plating treatment on the contact pad allows it to conduct 5-10mA.

The gold plating of the pads is not necessary in case you have to conduct and switch currents higher than 20… 30mA. This treatment is intended to last very shortly if the relay has to interrupt loads with a rated voltage higher than 50V, or capable of generating any electric arc between the relay contacts during the interruption of the load itself. In fact, the electric arc causes erosion by sublimation of the gold surface and, downstream of this phenomenon, the characteristics of the contact return to those of the standard contact.

In addition to modifying the surface material of the pads, the shape of the pad itself can be adjusted to reduce the contact resistance. In fact, to increase the contact surface useful for the passage of the current, it is possible to choose a knurled pad instead of a classic smooth and slightly concave pad traditionally used.

• Multiple points of contact between the surface of one pad and the other. The resistance of constriction is improved.

• Less deterioration due to electric arcs. Resistance from pollution or contamination is improved. When the relay switches a high load, the contact resistance degrades more slowly than in the case of traditional pads, as the electric arc is "distributed" over a larger surface.

HOW TO CUSTOMIZE YOUR RELAY AND CHOOSE THE CONTACT MATERIAL?

To choose the relay finishing and make it suitable for the intended application, it is necessary to consult the "ordering scheme" table and enter your ordering code.

Using this tool at the end of each data sheet, you can customize your relay by choosing the treatments and options from those available for each model.

In case you’re not sure which is the best choice for your application, you can contact us directly through this webform.

Chauvin Arnoux group
Chauvin Arnoux® the trademark par excellence of the group of the same name offers an ample series of portable measuring instruments for use in various industrial sectors, in the tertiary sector, for residential applications and for administrative offices.
Company
The Group